Abstract: This paper investigates variations of white blood cell count, morphological changes of the lymph nodes and the influence on the immune mechanism in animals caused by acupuncture stimulation. Although marked increases of neutrophils or pseudoeosinophils were not observed, a decrease of lymphocytes and white blood cells was seen. Results showed that the antibody value in the experimental group of animals was much higher than in the control group. Pronounced histological changes were observed in the axillary lymph nodes in the areas in which acupuncture stimulation was performed. These changes consisted of marked enlargement of the lymph sinuses, notable hemorrhage, increase of mast cells, and a picture of degranulation. A rapid increase of plasma cells was particularly noticed after 48 hrs.

Since ACUPUNCTURE anesthesia was used successfully in tonsillectomy of the palatine tonsil in 1958 in China (*1), it has been applied with good results i various cases in Japan, Europe, and the U.S(*2-6). The pain-relieving effect of acupuncture has been considered to be induced from gate control (*7), inhibition of pain in the thalamus (*8) or the reticular formation of the midbrain (*9), or the production of an inhibitory nervous transmitter. Recently, C. Takeshi (*10) suspected that serotonin, released from serotonin-producing nerve cells in the midbrain by acupuncture stimulation, had an effect on the spinal cord through the descending fibers. He also presumed the existence of a factor in body fluid, by which pain-relieving effects in one parabiotic animal were transferred to another parabiotic animal. On the other hand, the therapeutic effectiveness of moxibustion has been considered to be due to histotoxins produced in the local region on which moxibustion was performed. K. Tatai (*11-13) reported that adrenocortical hormone secreted as a result of the stress of acupuncture stimulation had a therapeutic effect. A great numbe of experiments have been reported on the influence of acupuncture and moxibustion on the body, with special reference to the variation of white blood cell count (*14), the blood pressure (*15) and the effect on the movement of the stomach and intestines. In this paper, variations of white blood cell count, morphological changes of the lymph nodes and influence on immune mechanism by acupuncture stimulation are investigated in animals.

The animals were rabbits weighing 2-3 kg., and Sprague-Dawley (SD) strain of rats of four weeks of age.

The rabbits were placed in supine position on an operating table or in prone position on an operation table for canine aurosurgery. All experiments on rats were performed with the rats in supine position. Short stainless steel needles of 0.18 mm. diameter were used for electrostimulation, and acupuncture was performed on the Tsusanli (ST-36) and the Pang-gu (extra meridian point) of both rear legs. A low-frequency therapeutic apparatus for humans, the Tany Oriental Pulse Mix Type Ⅱ was also employed to carry out needle-to-needle stimulation. he negative pole was connected with the ST-36 point and the positive pole was connected with the Pang-gu point. Electrostimulation of 1.5 to 2.0 volt and 3 Hz. was given. The synchoroscope Jr. Type

Ⅱ was used for monitoring the output.

Acupuncture stimulation was given to the site which anatomically corresponded with the site in humans. The Tsusanli point of the leg in humans was equivalent to the point located one fingerwidth outside the tibial tuberosity in animals, and the Pang-gu point was equivalent to the central point between the third and the fourth metatarsus (Fig.1). 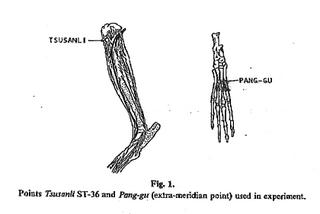 Blood was collected from the vein of the ear in the rabbits and the rete venosum dorsale pedis in the rats. Blood was sucked into a melangeur, and blood cells were counted in the counting chamber. The smear stained with May-Giemsa's solution was prepared for the hemogram.

In the control groups of rabbits and rats, 10 mg. of bovine serum albumin dissolved in 1 ml. of a phosphate buffer solution was subcutaneously injected as an antigen into the sole of the legs. In the experimental groups, electroacupuncture stimulation was given to the Tsusanli and Pang-gu points of both legs for 30 minutes after above injection. The antigen was given primarily on the 1st day and secondly o the 9th day in both the control and experimental group of rabbits.

Blood was collected every day from the auricular veins of the rabbits 1 to 28 days after the injection of the antigen. After separation of the serum, antigen value was measured according to the Ouchterlony method and was compared between the control and the experimental groups. In the rats, blood was collected directly from the heart 48 and 72 hours after the injection, and the comparison was made between the control and the experimental groups according to the above method.

In the control and experimental groups of the SD strain rats, the lymph nodes were removed from the axilla, the groin, the lumber, the mesenterium and the superficial cervical area directly, 24 and 72 hours after acupuncture stimulation. They were fixed in a 10 percent formalin and Helly's solution to prepare paraffin section, which were stained with the Pappenheim method and were histologically examined. 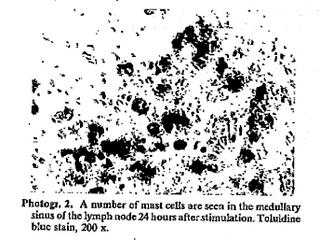 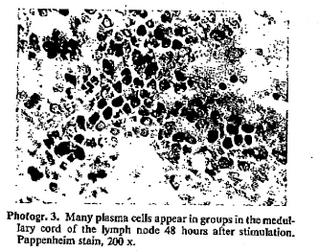 In the rabbits, contraction began to appear by electrostimulation at about 0.5 volt and increased with increasing voltage. After 15 to 20 minutes, the rabbits fell into anesthetic condition, in which no reaction was observed against pinching by hooked forceps on almost all skin areas of the body trunk and the rear legs, and against the prick of the skin with a needle. However, strong reaction of escape was found on the face, particularly on the lip and the tip or the nose. The same experiment was performed in the rats, and almost similar results were obtained on anesthesia.

Differing from the results of acupuncture stimulation in rabbits, no constant tendency was found in the rats. During stimulation, the count dropped in half of the rats and elevated in the other half.

Generally differential count of white blood cells in the rabbits repeated the decrease of lymphocytes and an increase of pseudoeosinophils during and after stimulation. No great variation was observed on basophils, eosinophils and monocytes, as their absolute number was small. However, some rabbits showed increased lymphocyte count and reduced pseudoeosinophil count during stimulation (Fig.4).

Similar results were obtained in the rats. Lymphocytes gradually dropped in number during and after stimulation, but neutrophils increased. Eosinophils, basophil or monocyte count did not greatly change, because their absolute numbers were low (Fig.5).

There was no significant variation in red blood cell count in both rabbits and rats. 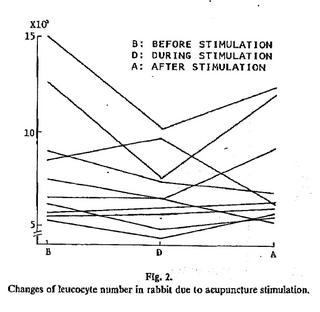 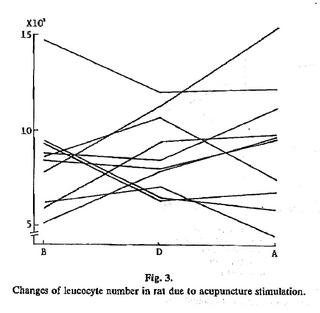 The antibody value was measured in the rabbits and was compared between the control and the experimental groups. The value began to elevate from the 8th day in both groups. In the control group, the value increased 8 times, reaching a peak on the 14th day, and then sank slightly until the 16th day. Finally, it decreased to 4 times and this value was constantly maintained. In the experimental group, the value increased 16 times to reach a peak on the 16th day, and slightly decreased to a value of 8 times. After the 18th day, this value was constantly kept, which was higher than that in the control group (Fig.6).

In the rats, the antibody value in the experimental group was twice as high than that in the control group at 48 hours, and four times higher at 72 hours.

3) Observation of the Lymph Nodes.

i) Gross Observation: In the experimental groups of both rabbits and rats, differed from the control groups, diffuse hemorrhage was grossly observed in the superficial cervical lymph nodes after 24 hours. After 48 hours, the hemorrhage was slightly reduced and had formed some spots, which had almost disappeared after 72 hours. 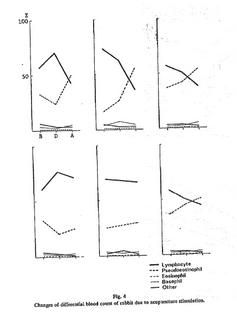 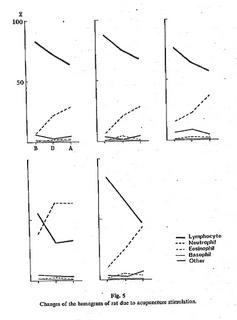 A great number of cases of acupuncture anesthesia in humans have been reported in China(*16),  Japan (*17/18)

and other countries. Basic studies on animal experiments using dogs(*19), cats(*20), rabbits(*21/22) and guinea pigs have also been published. The purpose of above reports was to clarify the mechanism of the pain-relieving effect of acupuncture anesthesia. However, our reports are intended to find the principles of the therapeutic effectiveness of acupuncture in diseases. In order to maintain a constant stimulation level, electroacupuncture stimulation was employed instead of acupuncture hand stimulation.

According to the experiment on dogs performed by K. Kitazawa(*19) , the point which anatomically corresponded with the point in humans was selected for acupuncture in animals. Although Kitazawa selected theChuchih and the throat point of the front legs and the Tsusanli and Pang-gu of the rear legs, we selected only two points on the rear legs to simplify the experiment. The negative pole was placed on the point Tsusanli of the legs in the proximal area, and the positive pole was placed on the distal Pang-gu point, because the negative pole usually had a stronger effect on the body and the peripheral areas were more sensitive.

Several preliminary experiments showed that electroacupuncture stimulation of 1.5 to 2.0 volt and 3 Hz. minimum was necessary to produce the pain-relieving effect in animals. This condition was similar to that of electroacupuncture in the treatment of humans.

In our experiments, however, marked increase of neutrophils or pseudoeosinophils was not observed, but we attach importance to a decrease of lymphocytes and white blood cells. Investigations of the causes and the mechanism of the variation of lymphocytes have not been completed and further work is required.

B. Terada et al.(*27) observed the inhibitory effect of acupuncture stimulation on the Arthus phenomenon in rabbits. They reported that marked local reddening was observed on the 7th day after the injection of equine serum as antigen in the control group, but that only slight reddening was first found on the 10th day in the experimental group of rabbits, on which acupuncture was performed. N. Igarashi(*28) found that the antibody value in the rabbits on which moxibustion was performed elevated earlier than that in the control group. Our experiments on electroacupuncture stimulation of rabbits and rats for 4 weeks revealed that the antibody value in the experimental group was significantly higher than in the control group. Dramatic histological changes were observed in the axillary lymph nodes in the areas in which acupuncture stimulation was performed. These changes consisted of marked enlargement of the lymph sinuses, notable hemorrhage, increase of mast cells, and a picture of degranulation. Rapid increase of plasma cells was particularly noticed after 48 hours. These changes seemed to be related to the elevation of immune antibody.

B. Hatai et al. (*29/30) injected bovine serum albumin as antigen into the sole of the feet of rats maintained under aseptic or general conditions. In the rats kept in aseptic condition, hemorrhage from a great many lymph nodes and release of histamine without accompanying degranulation of mast cells was observed. The hemorrhage was caused by the dilation of the capillary blood vessels and the invasion of the blood corpuscles into the sinuses. This process was assumed to be due to the effect of histamine. Although special rats maintained under aseptic conditions were used in the above experiment, we used rats raised under general conditions in our experiment on acupuncture stimulation. Therefore, there was a difference in quality. Hemorrhage was, however, observed in both experiments, which was considered to be induced from the increase of mast cells, the degranulation and acceleration of the transformation from lymphocytes to antibody productive cells. Postoperative infection need not be taken into consideration in acupuncture anesthesia, because these immune mechanisms may be present. 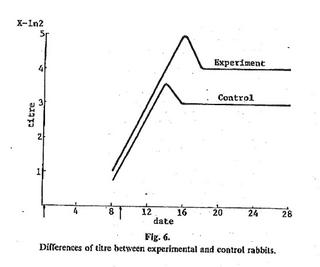